“Since his arrest and imprisonment by UK authorities, we have seen the US Government take the draconian action of compiling charges which would result in the imprisonment of Assange for 175 years [1], an assessment by a UN body seeing Assange as the victim of concerted abuse involving 4 democratic nation states over numerous years [2], and a misleading statement being issued by the Australian Department of Foreign Affairs and Trade (DFAT) over accusations of its failure to protect a citizen [3]”, said John August, Deputy President of Pirate Party Australia.

Nils Melzer, UN Special Rapporteur on Torture and Professor of International Law, University of Glasgow, speaks to the effect that Julian Assange’s situation has had on his mental health, with his comments that “in addition to physical ailments, Mr. Assange showed all symptoms typical for prolonged exposure to psychological torture, including extreme stress, chronic anxiety and intense psychological trauma.” He further comments that: “In the course of the past nine years, Mr. Assange has been exposed to persistent, progressively severe abuse ranging from systematic judicial persecution and arbitrary confinement in the Ecuadorian embassy, to his oppressive isolation, harassment and surveillance inside the embassy, and from deliberate collective ridicule, insults and humiliation, to open instigation of violence and even repeated calls for his assassination.” [2]

Along with two medical specialists, Professor Melzer visited Mr. Assange in Belmarsh high security prison in early May, concluding: “The evidence is overwhelming and clear. Mr. Assange has been deliberately exposed, for a period of several years, to progressively severe forms of cruel, inhuman or degrading treatment or punishment, the cumulative effects of which can only be described as psychological torture.” Further, he comments: “I fear if that pressure is not alleviated soon it might escalate in terms of the psychological consequences – and I think that’s what we’re now seeing.” Commenting on Australian assistance for Assange, Mr. Melzer said: “Australia is a glaring absence in this case. They’re just not around, as if Assange was not an Australian citizen. That is not the correct way of dealing with that.” [4]

Julian Assange has been charged under seal by the US Government, confirming what has been long suspected.

As the result of a cut-and-paste error [1], the US Government has revealed what was suspected all along – that the US Government has been secretly working to prosecute Assange to the full extent of their available laws. Assange has claimed this all along, and this new evidence shows his concerns were justified.

The Pirate Party supports all whistleblowers. Wikileaks publications have assisted in revealing government crimes, distortions and public lies, where the US Government has been known to hide inconvenient truths under the cover of security.

We, the Pirate Parties and NGOs of the Pirate movement around the world, express our solidarity with the Catalan Pirates whose websites about the Referendum of Self Determination campaign and the use of Tor are currently being censored by the Spanish authorities. Additionally, we express our solidarity with all citizens of Catalonia who have been met with violent state repression for exercising their democratic right to vote in the independence referendum.

We denounce all political censorship. The internet censorship by Spanish authorities is an unacceptable violation of human rights and political freedoms, regardless of the legality of the Catalan referendum and the merits of the secessionist cause.

In January 2014, the European Commission awarded a contract to the Dutch firm Ecor to research sales displacement (loss) rates on copyrighted content due to internet piracy. The report was completed in May 2015 but it appears the European Commission didn’t like the report’s conclusion – the results were skimmed and buried until Julia Reda from Pirate Party Germany launched a freedom of information request to make the document publicly available[1]. It confirmed what Pirate parties around the world have been saying all along – that piracy cannot be conclusively said to cause financial harm to authors and creators, and that there are choices for those selling copyrighted works which are more likely to boost their sales than further attempts at cracking down on piracy via regulations or rights management, which often breach and erode the civil rights of everyone.

It’s true that the study did find the strongest potential displacement effect (sales loss) in films and TV shows at 27-40% for the first year of release with this loss being most prominent in cinema visits, where distribution companies will often restrict access through other channels to try and funnel consumers into their preferred medium (cinema). It’s interesting to note also that this potential loss was offset by an increased rate of legal streaming and DVD rentals as a potential side effect of online piracy. What’s extremely interesting is that the study found the average consumer ideal (most willing) price for films and TV shows was below the average market price, suggesting overpriced content is a significant driver of piracy rates[2.1].

Using an alternate approach the report also suggested there may be positive links between piracy and legal transactions of media, that increased piracy in some instances resulted in increased content sales. This was most prominent in concert goers who also streamed or downloaded music, and people who downloaded games[2.4]. Pirates who illegally downloaded large amounts of content were not found to have caused any lost sales[2.2][2.3]. 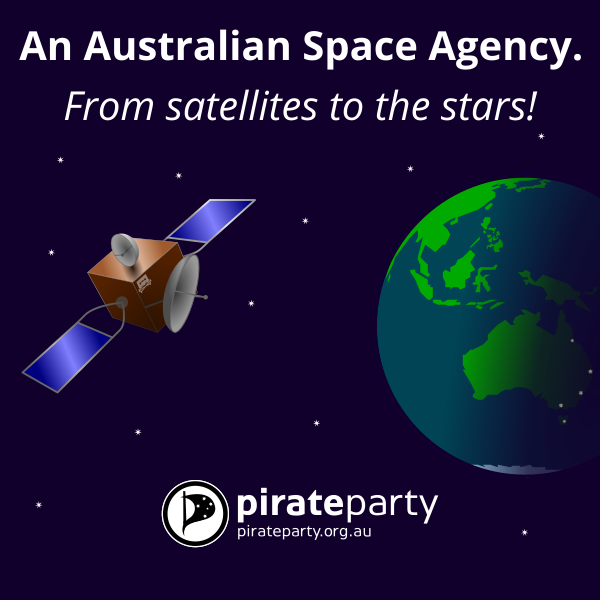 Pirate Party Australia supports in principle the government’s call for a review of the space industry capability in Australia. This is an opportunity for the government to win back trust lost in the technology sector through implementation of the short sighted fibre to the node model for the National Broadband Network. A rapidly expanding Australian space industry should form part of a multistrand approach to science, technology, and innovation policy as laid out in Pirate Party Australia’s policy platform, which calls for a National Science Plan[1].

The creation of a national space agency provides opportunity for visionary new public policy to place Australia at the forefront of global aerospace and telecommunications industries, bringing investors and technological capital to Australia. This matches Pirate Party Australia’s policy for the formation of a National Institute for Space Science and a $100 million grant for development of infrastructure as recommended by the 2010 National Committee for Space Sciences Decadal plan[2]. It will also support the Party’s proposal for an online science portal available to schools and the general public containing free materials for science education[1].